I first met Rudy in the early/mid 1990s through the UNIQUE classified ads. A self described ‘tattoo and piercing enthusiast’, Rudy and I exchanged letters and photographs over the years, sharing stories of our own tattoos and experiences. Our correspondence eventually fell off and, as is prone to happen, we lost touch with one another. I’m not sure what ever happened to him, though many of his letters are still in my collection.

Rudy is briefly mentioned in an article by Gauntlet’s Jim Ward: http://runningthegauntlet-book.com/BME/jimward/20050715.html

In 1996 Rudy sent me a photocopy of a profile on him from the NTA’s magazine- what follows is a transcript. He did not provide a month/year/issue number.

My interest in tattoos became activated as a youngster in 1954 when I read a critique about Hanns Ebenstein’s book “Pierced Hearts and True Love” in a local newspaper in my native Switzerland. I wrote to Hanns, who in return put me in contact with one of the most famous British artists, Rich Mingins in London. 1955 I was sent to London for further education and then met Rich in person. The same year, probably the first national convention to place in a pub in London, organized by Rich Mingins, , Les Skuse from Bristol and Jessie Knight from Aldershot. This was also the start of my photo collection.

In 1957 I emigrated to the United States and got really involved in tattooing. My first tattoos were done by sailor Eddie Evans in Camden, New Jersey and Paul Rogers who then work with him. Work by Phil Sparrow (Chicago), (then Crazy) Philadelphia Eddie Funk, Huck Spaulding (Albany, N.Y.) and Buddy Mott (Rhode Island) followed.

I then realized that very many people are interested in tattooing, but had difficulties meeting others of the same interest. Therefore, in 1963 some friends and I in New York decided to do something about it. We found it the “Tattoo Club of America “, probably the first American Tattoo club. I collected news items related tattooing and in January 1964 published the first periodical dedicated tattoos, the “Tattoo News”. As a supplement the “History of Tattooing” was added from time to time. Tattoo tidbits and instructive news items, very much in the vein of the column now written by Lal Hardy for “Tattoo international”, where the main attraction of the publication.

On 5 October, 1964 I organized probably the first tattoo convention in the U.S.A. – and if you hadn’t already guessed it, Elizabeth Weinziril was, of course, there. That was the time when a few young artist such a sailor Jerry Collins of Honolulu started to change the style of American tattoos. The beginnings were small and the magazine only mimeographed, but it was a start. Unfortunately my job became more and more demanding so that the December 1966 issue of “Tattoo News” was the last to appear. I had nothing to do with the later magazine which took over my title.

In 1970 the cutback in the defense industry in the USA for which I worked as a physicist, forced me to look around and I went to Munich, Germany to work for a German firm. In 1973 this firm sent me to England, where George Bone and Alan Oversby in London have mainly worked on me since. I have not missed a single convention of the TCCB be since its beginning and felt very honored when I was asked on several occasions to be on the jury of the beauty contests.

It is good to see that the Tattoo tradition continues, many more people get tattooed with better designs, more clubs are founded , more publications printed and more conventions held. It shall continue. 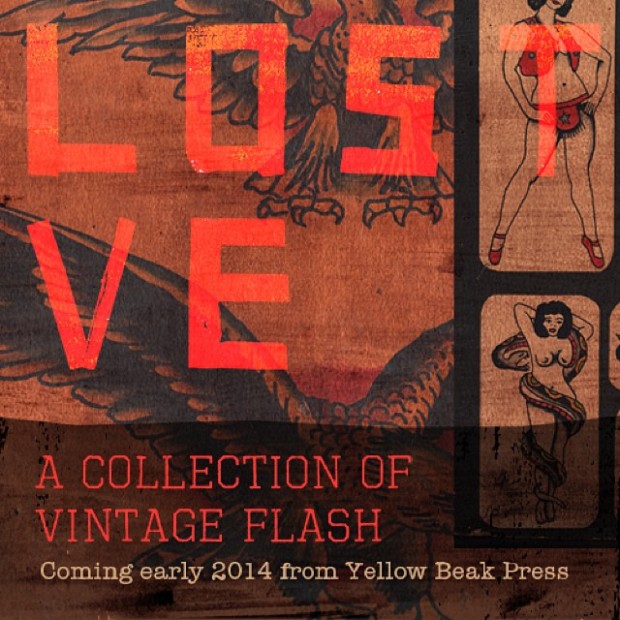 Do you folks remember that time that Yellow Beak Press put out two of the best tattoo books in recent memory?
2012 saw the release of the mammoth tome chronicling the life and times of Milton Zeis; tracing his roots, reprinting classic supply ads and featuring Zeis supply original flash sheets side by side with repaints by 95 of the world’s best tattooers while 2013 gave us Born Weird- a collection of truly trashy, offensive, subversive and downright hilarious 11×14 sheets supplied by a host of demented souls who should be sorry for what they unleashed onto the world.

Yellow Beak has set a high standard for tattoo publications, and I’m very excited to see what comes next!

In the 1990s, Tattooist Jonathan Shaw interviewed an iconic lineup of Tattoo Legends for ITA magazine. With his kind permission, Occult Vibrations is going to be digitizing these must-read interviews.

Back in the early 1970’s, when I first became interested in the mystery of tattoos, tattooing was a closed world, almost a secret society. Most tattooers were very tight-lipped about their secrets, and tattoo supplies weren’t openly available. Col. William L. Todd was working alongside his long-standing partner, Bob Shaw, at Long Beach, in California’s famous Nu-Pike, a sprawling amusement park surrounded by military bases and studded with a dozen tattoo parlors- a very different scene from today’s genteel tattoo/art studio scene. The Pike is an important location in tattoo history, a place where history and tradition came aline for those of us who were fortunate enough to be around the the words, action and technically superior tattooing of guys like Col. Todd.

A tattooer’s tattooer of the old school, Todd is a perfect southern gentleman with a streak of the badass bootcamp drill sergeant. He always ran a tight ship!

Today, the amusement area of the Pikee is gone, paved over by developers in the endless drive for progress. All that remains of the glory days is one lone tattoo shop where the famous Bert Grimm tattooed for so many years.

Jonathan Shaw: We’re at the Bert Grimm Studio, probably the oldest tattoo shop in the country.

Col. Todd: That’s what they say.

JS: Col. Todd, when did you first start tattooing?

CT: I started in 1947. I was stationed at Lackland Air Force Base in San Antonio, Texas. I’d always been interested in tattooing. I had a couple of officers who were heavily tattooed, one of them having been in the Navy. I was raised on a farm where you didn’t see tattooing unless it was with a carnival or something like that passing through. I went into town in San Antonio, went up and down Houston street, where all the tattooers were, and down toward the end of the street was a circus trailer set up on blocks by itself that said “Tattoo”. It belonged to a gentleman named Jack Tyron. Anyway, Jack told me that he was tattooed all over when he was 16 by Charlie Wagner. He traveled with the circus for years then he bought a commercial lot and the circus trailer and set up shop. It’d be odd to see something like that today.

I went in, and after talking to him I got a little tattoo and asked him about buying a machine. Oh yeah, he said he’d sell me a machine. He started telling me about the mail order places.

JS: Zeis? Was it Zeis back then?

I have been hoping to put some badass blog entry together, in hopes that I would hopefully make a good impression, or at least not harsh the vibe…

SIX attempts later, I was sitting where I usually am: The Tattoo Shop.

Only this time I found myself in Minnesota! Yes it was 11:04pm, not too late then, it was 9 degrees outside, a nice 68 degrees inside The Aloha Monkey Tattoo shop in Burnsville, Minnesota, a small town on the south end of Minneapolis…

Where a lot of History, Art, and LOVE come together like a Beatles song…

So… If you didn’t know the following: you soon will.

The Aloha Monkey got its name from an old Sailor Jerry tattoo design, which is fitting as Mike Malone, the original tattoo artist that founded this shop worked for Norman Keith Collins AKA Sailor Jerry for a pretty good chunk of time, took over when Collins passed, Malone moved around a lot, but he’d always revisit Sailor Jerry’s Shop out in Hawaii.  Well Malone has passed on, but the Monkey is still here, only Josh Arment has been passed the torch, and it’s a new flush of different generations making this place vibrate nowadays.

We only got to hang out with Arment for like an evening because he was heading to Milan to work the Convention…  But, it’s always a good reminder when you realize damn, I missed this dude, Richard said he didn’t get enough time to chill with Arment, so another trip is in order… But when it’s warmer riding weather…. I agree 100%!.

I often talk about magic, the magic within a tattoo shop, I mean a shop can look cool, and feel pretty, but the vibe has got to be there, and there has got to be a funk about the place that leaves a lasting impression on the taste buds of your psychy… And this place has the magic. It was a good night. I had never been to the “Monkey”, but it like a handful of other truly unique places, like: Spotlight Tattoo in Hollywood, or Electric Ladyland Tattoo in NOLA, or Jinx Proof in DC, or Rock of Ages in Austin… I could go on and on….

END_OF_DOCUMENT_TOKEN_TO_BE_REPLACED

Norman Keith Collins, better known as ‘Sailor Jerry’, was born on January 14th 1911.
Today would have been his 101st birthday. His legacy to the tattoo community is as big as his personality was said to have been.