Halloween is fast approaching and soon your Instagram feed will be Inundated with tattoo shops offering quarter sized $31 tattoos that, were it not October and not thirty bucks, you’d never consider getting. Luckily there are still tattooers out there who’re still pushing the envelope of creative/cool and as per usual Jacob Des is on the top of my list. He’s going to be tattooing in Bloomington this weekend and will have some rad Halloween flash available- contact booking@jacobdes.com for more information. 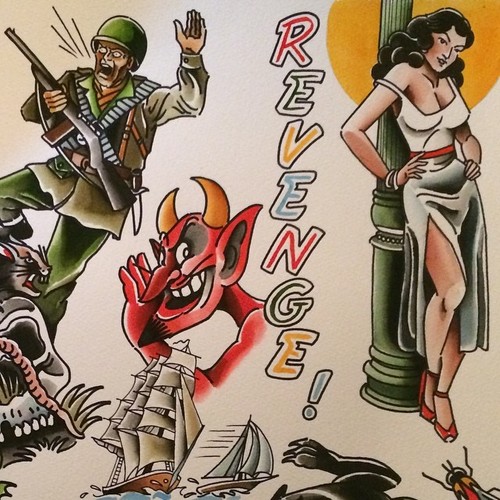 “Well, of course there are all manner of lesser imps and demons, Pete, but the great Satan hisself is red and scaly with a bifurcated tail, and he carries a hay fork”

Flash sheets by Dayton, Ohio’s Jacob Des are usually packed with so many rad designs that it’s hard to process it all without repeated viewing. A ship here, a row of ducklings there,  the Infernal Majesty himself popping up with a creepy baseball player mentoring a young boy in the fine art of swinging. You’re usually left with a wondrous sense of what the fuck am I looking at, followed by the realization that everything you’ve just seen would make a hell of a strange tattoo.

I’ve mentioned it before, but Des is on the very short list of tattooers I’m saving my remaining skin for. If you’ve got open space and want a killer tattoo you can find Jacob at: http://jacobdes.com

With the release of Milton H Zeis: Tattooing As You Like It Scott and Kayla of Yellow Beak Press put out what I consider to be, hands down, the best tattoo book of 2012. The project was a fitting tribute to the Zeis legacy; a whopping 300+ page tome featuring reinterpretations of classic tattoo designs by some of the world’s finest tattoo artists side by side with the original Zies flash. But it was much more than that. Scott and Kayla did months of research and traveling, collecting rare Zeis memorabilia and painting a portrait of one of the most influential figures of the 20th century tattoo world.
It was a massive undertaking, and it left me wondering what was next for Yellow Beak Press. How do you top a book like that?  How do you match it’s class and it’s elegance?

You don’t. Instead, late last year Scott and Craig Brown of Historic Tattoo hand picked 29 amazing tattooers to take part in the ‘Born Weird’ show at Portland’s Upper Playground gallery. The pitch? Each artist was asked to create four sheets of 14×11 flash that’s weird, gross or just plain bizarre. The artists did not disappoint. I’m going to be completely honest here; I’ve had a sneak peek of the paintings and this stuff is just… odd. Amazingly odd. Confusingly and profoundly odd. Blasphemous, grotesque and most of all funny, each sheet makes you scratch your head (and occasionally… other places) and say, out loud and for the world to hear: What the Fuck did I just see?

The artists channel the spirit of Hardy’s infamous ‘Born Weird’ Devil, but with a lot more genitalia. Classic American Weirdo designs with no shame or need for explanation. There are going to be people who think that the flash designs in this book are untattooable; and they’re probably right. But this stuff is priceless none the less.

The show ran for two months in Portland and now the Yellow Beak gang are getting ready to roll out the preorder for the exhibit catalog, which will be 120 pages long at the original print size of 14×11. It’s only limited to 2000 copies, with the first 200 preorders snagging a limited edition water color print. Like the Zeis book, I doubt these will last long, so keep your eyes peeled for the preorder page over at Yellow Beak Press. I’m hearing that it should be live on Friday.

As my latest tattoo from Robert Ryan heals (and coincidentally enough, it’s of this fella above’s arch nemesis) I find myself being very protective of the remaining skin that I have left to tattoo. I’ve posted ‘painted into a corner’ updates before; that I’m rapidly running out of available spots and that every new tattoo is one less that I’ll ever be able to get.

It makes me happy that I’m so close to being ‘done’ but there are just so many folks out there doing killer work who I know I’ll regret not being tattooed by- folks like Michael Bennett, Adam Shrewsbury and Ohio’s Jacob Des.

Every time Jake busts out a new painting (and it seems it’s daily- he’s the hardest working painter in Tattooing sometimes) I realize that saving him a little spot is a necessity.

So enjoy this one from Mr. Des. It’s the devil, and who doesn’t love the devil? 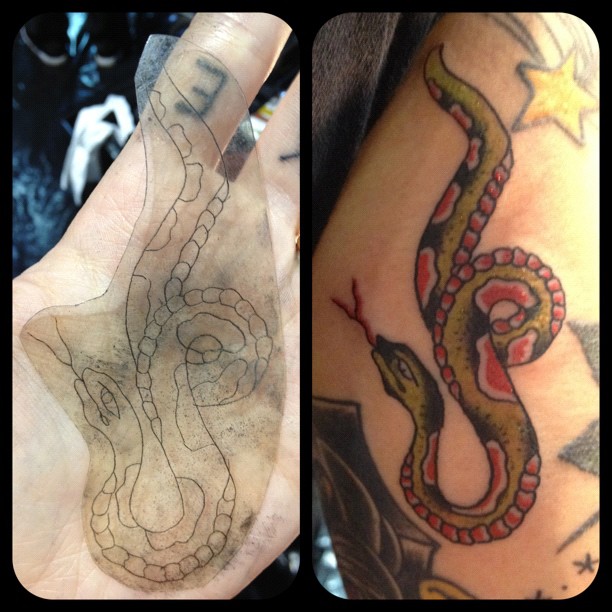 Driving home from work on the second night of the Philly Tattoo Convention, my friends and I got into a discussion on tattoo designs being sigils that accumulate power by repetition; that over time an image becomes stronger (in whatever context you’d like to pin on it) as it becomes shared and refined. That’s what I love about the amuletic power of Traditional Americana tattooing; that you have a connection to the designs. That the black panther head you get from Mike Wilson or Chad Koeplinger hasn’t changed much since the design originated despite them putting their spin on it.

It’s especially true when you’re getting a design off of vintage flash; something that literally hasn’t changed in a 100 years connecting you not only to the artist who painted the design but all of the clients who’ve worn it over the years.

The conversation was sparked by this tattoo by my friend Andy Perez.
Andy picked up an original stencil cut by Lee Roy Minugh- the Prince of the Pike- at this year’s Philly Tattoo Convention and knew right away that he had to use it. Luckily he got the chance. Think about it- Every time that Lee Roy tattooed that snake, he used THIS acetate stencil. Not something from the thermofax, sized and resized till it was just right and then tossed into the trash. Every person who wore this design from Lee Roy was touched by this stencil.

Andy had this to say about it:

“Bought the stencil from Eric Minugh, it was his Dad’s. I wanted to use it the second I got it, knew Pat was there and he was one of two people I would have put it on who I knew would appreciate it. (and I knew it wouldn’t take much convincing.) It took about three tries to get it on and once I did was still barely there. But we went for it. And like anything else worth doing in tattooing/life it was challenging, and nerve wracking but ultimately super fun and rewarding.”

Patrick- the fella lucky enough to get the tattoo, followed up with this:
“I feel extremely lucky to have gotten it and, like Andy mighta mentioned before it was weirdly magical. Still super stoked. I think Perez was one step away from giggling with delight through the whole thing.”

Having seen Andy immediately after the tattoo…. I can second the giggling with delight thing. Total tattoo geek stuff.

I came across this post by Robert on tumblr and, with his permission, am reposting it here on OV. This is a great primer on the whys/hows of using symbols; don’t just stop with mandalas/hex signs… look into the deeper meaning behind the designs and you’ll get much more out of them.

Lately many people have asked me how I started painting and tattooing these images. For me it began with “Hex” signs of the Pennsylvania Dutch that I had seen as a child at my Grandfathers farm, Later in my teenage years I began to study the Vedanta, (Vedic Hymns) I began to notice similar patterns used in the Hindu tradition known as the Yantra. Then seeing them in Tibetan Buddhist mandalas , Then again in the Islamic tradition in the decoration and structural designs of the Mosque. Finally as I began my tattoo apprenticeship I started finding many traditional tattoo designs that had mutated from compass roses into these emblematic star and flower clusters. This thread runs deep. Early on in my career I saw a tattoo that Brooklyn tattoo master Mike Perfetto did on NYC bar owner Deb Parker which incorporated Pennsylvania dutch folk flowers and traditional swallows I was floored!

Later that same year I met tattooer Daniel Higgs and was blown away that he was also using this powerful visual element in his own work. From that point I was convinced. I began working with many different patterns from various cultures and time periods. This study was so important to my life because it brought me to an understanding of sacred geometry which I believe is the formulaic system of all living things. Now these images has become very popular in modern tattooing which was inevitable, They resonate on so many levels with artists and collectors . Its refreshing to see but sadly I have noticed many tattooers using them carelessly, arbitrarily adding them to the long laundry list of designs to make things “mystical” or weird for weirds sake. The shame of it is that we can all benefit from the proper use of these symbols, Tattooer and client alike.

Study of the mandala can be employed for focusing the minds attention, a spiritual teaching tool to establish sacred space, and as an aid for meditation and trance induction. Most importantly mandalas can teach us balance to create wholeness in our lives . These images should be pursued with respect and reverence for it’s development and purpose . I think it is important to note the works of Tattooers like Thomas Hooper, Jondix, Tomas Tomas, Xed Le Head, Steve Byrne, Chad Koeplinger, Tom Yak , Greg Christiansan as well as many who have taken the time and effort to properly understand and apply these designs with incredible results. When manifested with the correct amount of love these talismans may bring endless joy to many. -RR