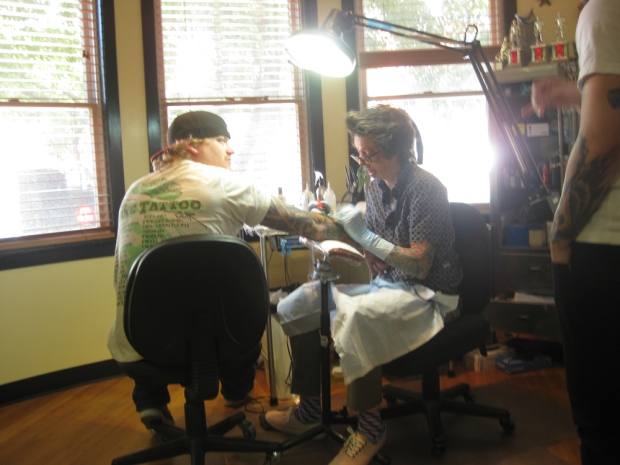 Vice’s Tattoo Age has proven to be a breath of fresh air for the documentation of modern tattoo culture. The Santoro episodes were a great start for what promises to be a very good series.

The second artist who’s getting the deluxe treatment is Grime. The Showtimes are above, and a primer on Grime follows;

“Grime is the hardest working man in tattooing. Known all over the world for his graphic style, Grime takes the most common subjects and transforms them into aweing images. Grime first cut his teeth in the tattoo world in the 90s in San Francisco, working with greats such as Ed Hardy and Marcus Pacheco. He now owns his own studio, Skull and Sword, where he works alongside Henry Lewis, Yutaro Sakai, and Lango, the “Brazilian Panda.” When Grime is not tattooing, he is publishing books on everything from the L.A. River to personal memoirs.”

I’m someone who gives a lot of credence to meaningful coincidence; synchronicity has been a very strong influence in my life for the last decade, one that’s guided me in the right direction when I was lost, taken me in when I needed it and introduced me to some really amazing folks.

When I was getting tattooed Monday at Electric, I was introduced to a gentleman named Dan. Earlier this morning, I posted the Tattoo Age promo here on OV. A few minutes ago I received a press release for the Tattoo Age series, which features the very same Dan Santoro.

Nice and smooth, just how I like it. Follow the break to find the showtimes/information on Tattoo Age.