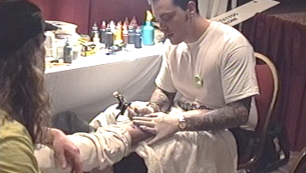 I’ve been working on restoring footage from an 8mm video cassette that was recorded at the 1991 Meadowlands tattoo convention. It’s a frustrating process sometimes; I’ll find 3 seconds of Eddie Deutsche tattooing but what are you going to do with three seconds followed by a shaky camera move to the next booth.The screen grabs often promise something more interesting than the finished, edited video.

Archival woes, I tell you what.

The third and final Amsterdam Tattoo Convention 1995 clip; this one is the roughest with a little more shaky camera than I’m happy with, but ultimately a pretty fun little video. The sound has been removed due to copyrighted music in the background, so enjoy the silence.

I don’t have a complete list of the artists who tattooed Enigma- offhand I spotted:

It’s only taken me 242 months to get the video footage I shot at the 1995 Amsterdam Tattoo Convention digitized and uploaded. That’s a little longer than it takes me to accomplish most of the things in my day-planner, but not by much.

I filmed this when I was twenty years old on an 8mm video camera without really knowing how to use it; twenty years later I did my best to take the little clips I shot and put them together into something watchable. 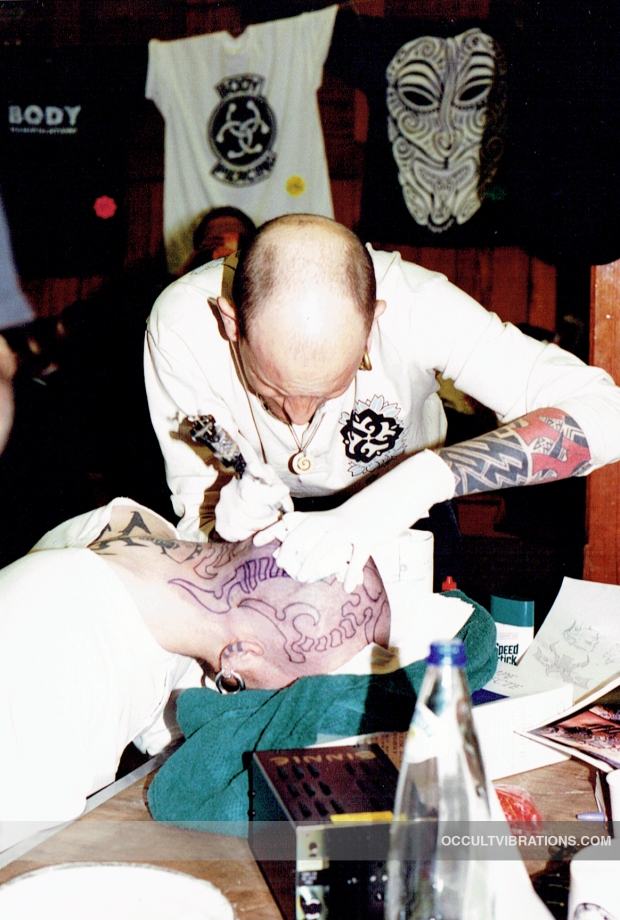 Twenty years ago today my brother Robert (who took the majority of these photos on honest to goodness 35mm film) and I were strolling around in Amsterdam’s famous Red Light District, winding down from Hanky Panky’s Amsterdam Tattoo Convention. We had spent the previous three days at the Beurs van Berlage, the Damrak’s former commodities exchange and current convention venue, snapping pictures, getting tattooed and- for two L7 farm boys from Florida (I was 20 at the time) enjoying an inescapable contact high from the dozens (or hundreds) of convention go-ers who were enjoying the city’s liberal drug policy. For the last twenty years I’ve used Henk’s event as the yardstick by which I’ve measured every other tattoo convention I’ve attended and one by one they’ve all fallen short. The vibe was perfect; casual and energetic with each booth pushing out one amazing tattoo after the other. As the nights wore on people didn’t leave- they’d grab some floor space to sit down with old and new friends to shoot the shit about tattoos, travel, whatever. The tattoo world was considerably smaller then and every person you met had the potential to be a new friend- I still maintain friendships with folks I met that weekend.

Everything lined up perfectly, including an Amsterdam tour date for the Jim Rose Circus Sideshow- which led to one of the more memorable  events of the weekend- The Enigma, tattooed head to toe in puzzle pieces- had 22 (or 23?) of the attending artists- from Henk and Horiyoshi III to Bob Vessels and Alex Binnie- fill in some of his open outlines with his trademark blue. At the same time. It took quite a bit of maneuvering to get everyone working together, but the craziness of it fit in perfectly with the gonzo  goings on at the show and while I only managed to snap one photo of it (which I didn’t get a chance to scan tonight) I do have it on video. One of these days I’ll get a working 8mm video camera and will get that footage online.

It’s surreal to be able to look back on an event that still seems so fresh in my mind and realize that two decades have passed. I’m happy to be able to share these photos with you folks. 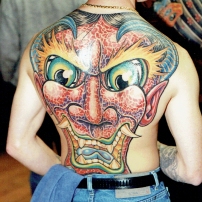 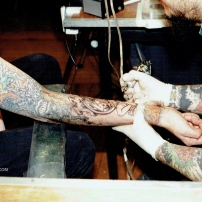 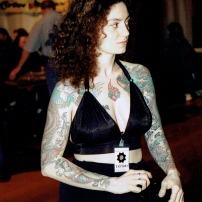 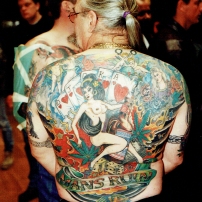 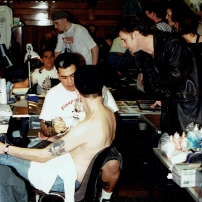 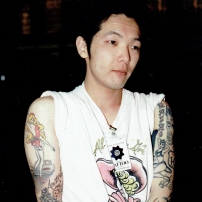 This has been a really frustrating process so far.
I’m not sure what the issue is, but my video capturing system has been un-synching the audio of any longer recording (it seems to be over 10 minutes now) and I’m not sure if it’s the software, the hardware or just dumb luck. In any case, I’m going to have capture smaller sections and flex my editing muscles to get it back into one piece. Until then, I apologize that the audio is slightly off in this first excerpt from Michael O. Stearns’ PHILLY GETS INKED.

This clip features a very young team of Bernie Luther and Guy Aitchison tattooing in their hotel room due to an overbooked 1990 NTA Convention in Philadelphia. It’s strange to think that Aitchison, who’s widely regarded as one of the most influential tattooists of his generation, used to be the new guy. He tattooed me not long after this video was filmed (which is also strange to think about- it’s been almost 25 years) and while his style has evolved over the years you can see the roots of his aesthetic in this clip.

Bernie Luther was also coming into his own during the early part of the 1990s. As spoiled as we are with Instagram, Tumblr and blog culture it’s easy to forget the impact that ‘the magazines’ had on an artist’s career before the rise of social networking and instant uploads. The magazines- most notably Outlaw Biker’s TATTOO REVUE and Easyrider’s TATTOO were content machines, needing constant grist for the mill. An artist getting magazine coverage would expose them to a worldwide audience and provide bragging rights and validation with some tattoo fans becoming ‘collectors’ who sought out artists who regularly appeared in print. Obviously same can be said for Social Media, but back then it was a much smaller community.

But I digress. I’ll work on getting the audio synch issue fixed and to get the tape back to it’s generous owner as soon as I can.