Emil being tattooed by Danny

I first saw Emil Gundelach in an early 1990s video by photographer/anthropologist Charles Gatewood. His tattoos- decades old and sun faded- were amazing; old pieces by Raven and DeVita and a host of oldschoolers who’s names were lost with him. He was a friend of a friend and though I never had the pleasure of meeting him I occasionally find photos of him in my archives from the tenure of his friendship with Jack Yount.

Scanned from a 3″x5″ photograph.
Chest Panels by Cliff Raven.
Approximately mid-1970s.
From the collection of Sailor Sid Diller.

I was pulling over some footage from a 1986 VHS tape from Sailor Sid Diller’s collection today when I found another snippet of a documentary featuring iconic tattoo artist Cliff Raven. I have no information on this documentary; I’ve found several segments of varying quality on older VHS tapes in my archives. I’ve done my best to balance out the sound and picture, but with most of these older videos it’s a bit of a challenge.

A lot of these tapes were compilations; pulling footage from 8mm film, VHS camcorders and copied documentaries shared with other tattoo artists. I’ll continue to add footage as I find it. 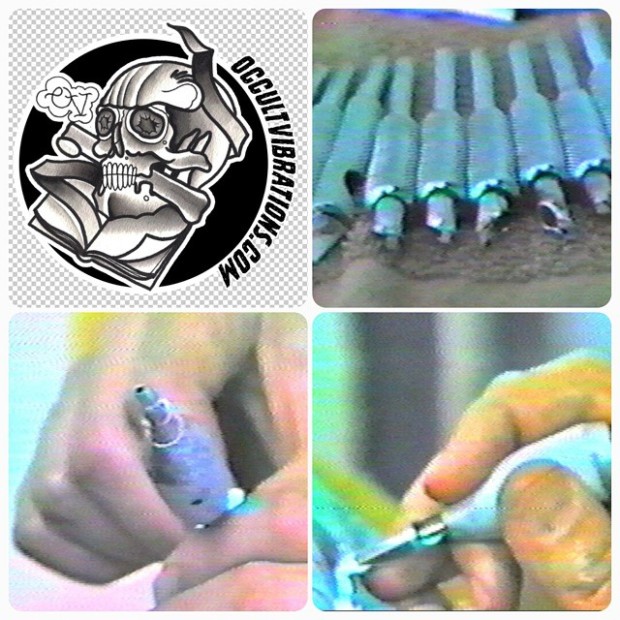 I found a little more footage from “Tattoo Take Two” featuring Cliff Raven today while scanning a thirty year old VHS Cassette that belonged to South Florida tattooer Sailor Sid Diller. It’s a short clip- just over two minutes and forty seconds but it’s the cleanest footage I’ve found so far. Still has that faded ‘copy of a copy’ look, and obviously it’s over 30 years old, but… we’ll see what I can do in Final Cut Pro! 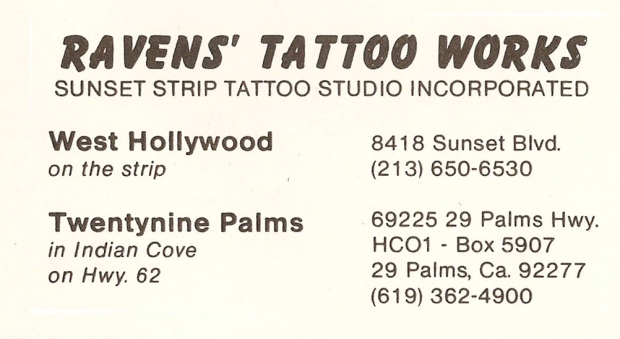 This business card came falling out of a photo album I was going through a few months ago. It was picked up at Cliff’s shop in 29 Palms by my friend Jack and tucked away in an album of convention photos.

This reminds me that I need a new business card.

Professor Bud Huizinga (the spelling could be off; I’ve seen it several ways) had quite a few amazing tattoos from Cliff Raven, including this avian piece that was completed sometime around 1982.

Cliff was an interesting figure in the history of Tattooing; an educated man (with a B.A. in Fine Arts) as well as being openly gay, Cliff pushed boundaries on a variety of fronts and left a lasting legacy that has influenced generations after his retirement. As such, I really hope that the ‘Cliff Raven licensing’ thing ends up flopping. Jeans. Wine. Bottled water. While Ed Hardy is still around to balance out the negative (at least by some of our standards) effects of Christian Audigier’s douchebaggery, the commercialization of Raven will end up being a soulless cashgrab with no positives.

I inherited a large number of tapes from the Sailor Sid Diller collection when my mentor passed away; this short clip is from a video Sid and Ken Meyers made in 1974. (The year I was born) It features tattoo icon Cliff Raven working on a few pieces. At the time Cliff was guesting in “underground” shops catering primarily-if not exclusively- to gay men. The tattoos he’s doing go along with that culture.

These videos originally had no sound so I’ve chosen to keep them that way.

Another VHS rip, albeit considerably worse quality, is the first half of “Tattoo Take Two” featuring an older Raven. The audio is crackly and loud, but for the sake of history it’s worth watching: