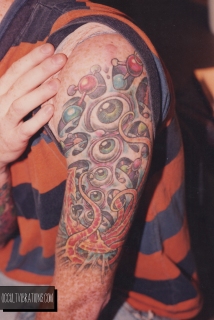 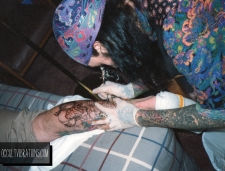 I think for every tattooed person there is a moment where we come to the understanding that we’re going to end up heavily tattooed. A personal big-bang of understanding that we can get whatever we’d like tattooed on us as long as there’s someone skilled enough to translate the idea; for me one of the main nodal points in my own tattoo history was discovering Guy Aitchison in the pages of Outlaw Biker’s Tattoo Revue magazine some time in early 1990. I had gotten tattooed before finding Guy- A biker named Darnelle Hoen, Bill Hannong from Ancient Art in Florida and Bill Liberty at Liberty Tattoo in Sacremento had all worked on me but I was directionless. I wanted to be tattooed but the kind of imagery I wanted wasn’t really available. Even my first tattoo (by Darnelle) was a custom tattoo- a near line for line tracing of the terribly drawn (embarrassingly enough Rollins inspired) Sun that I brought in and in all of it’s blown out glory it was a reminder to me that sometimes you just have to get what you get.

When Chicago poet Lori Jackson submitted the first of two articles- defining articles that without a doubt propelled Guy into the spotlight- I finally found someone who was close to my age who was doing tattoos; someone who read the same comics I read and watched the same movies and who took those influences and created tattoos that were previously unthinkable. The first article- No Tasmanian Devils Allowed– was a game changer. The second- a punkasfuck travelogue chronicling Lori & Guy’s 1990 roadtrip that found them traveling the US gave me a list of people to learn more about- Fred Corbin, Eddie Deutsche, Dave Lum…  the list when on and on. Inspired by his work I began a correspondence with Guy who was always more than generous with answering my geeky fanboy letters and even offered to fit me into his appointment book when visiting Florida for Daytona Beach’s infamous BIKE WEEK.

Guy was an unlikely artist to be working the event; his whole appeal was how different he was than the standard biker tattooist archetype of the time but even that turned out fortuitous. In 1992 I would finally get tattooed by him- and through that appointment went on to meet quite a few characters who’re still very much part of my life; John Himmelstein (who sleeved my left arm and a big chunk of my left leg) Mike Wilson (who was still an apprentice but went on to tattoo my back piece, right foot, right shin, fingers and sides of my hand) and Annette LaRue all worked at the shop in one capacity or another (artist, apprentice and guest) and have remained people that I’m very thankful to call friends.

Over the years Guy’s work has evolved from the more Giger influenced biomech to his own fractal/organic and as I’ve evolved as a tattoo collector my personal aesthetic has moved away from the imagery that appealed to me in my younger days, but without Guy I wouldn’t have had that portal into truly personal tattooing and will always count him as a major influence.

These photos were taken from 1991 to about 1994, 35mm scans from my collection. If there is an interest I could probably have my arm twisted to transcribe Lori’s Tattoo Revue articles and post them here for you folks- let me know in the comments.

One more from 1991 from Guy Aitchison and Mad Jack Kaplan’s Guilty and Innocent studio in Chicago. I miss print advertising/fliers. I unapologetically love bio-mech.
It’s been really rad seeing the resurgence of 1990s styled Giger-esque mech in my Instagram feed- with Biomech Collective, curated by Guy Aitchison and Kurt Windish, being the best aggregate account for all things pipe, tube and gear.

This shop flier from Guy Aitchison’s GIP Tattoo Shop dates back to 1991.

A lot of the content I post on my various history blogs comes from happy accidents; today I was looking for a piece of correspondence for a post intended for another site and I found a small packet of letters dating back to 1991 from tattoo artist Guy Aitchison. I excitedly scanned a few fliers and business cards to share here on OV and, as often happens, never did end up finding the item I was originally looking for.

This card dates back almost 25 years from when Guy was working at “Guilty and Innocent Productions” with Jack Kaplan.

A few weeks ago I made an impulse buy on eBay that ended up reconnecting me with some friends that I hadn’t spoken to in over twenty years; we’ve been emailing back and forth and it inspired me to go through old photo albums to see if I could find any pictures from the last time we all hung out. This little guy here- a sticker given to me by Guy Aitchison in 1992, fell out of one of the photo albums I was flipping through. It’s still perfectly intact after 23 years, a little memento from Guy’s GIP shop in Chicago, IL. I also came across a handful of photos from my appointment with Guy in 92- getting tattooed surrounded by bikers and chaos at Daytona Beach’s annual BIKE WEEK celebration. I’ve dropped them in my scanning queue, really great stuff!

This has been a really frustrating process so far.
I’m not sure what the issue is, but my video capturing system has been un-synching the audio of any longer recording (it seems to be over 10 minutes now) and I’m not sure if it’s the software, the hardware or just dumb luck. In any case, I’m going to have capture smaller sections and flex my editing muscles to get it back into one piece. Until then, I apologize that the audio is slightly off in this first excerpt from Michael O. Stearns’ PHILLY GETS INKED.

This clip features a very young team of Bernie Luther and Guy Aitchison tattooing in their hotel room due to an overbooked 1990 NTA Convention in Philadelphia. It’s strange to think that Aitchison, who’s widely regarded as one of the most influential tattooists of his generation, used to be the new guy. He tattooed me not long after this video was filmed (which is also strange to think about- it’s been almost 25 years) and while his style has evolved over the years you can see the roots of his aesthetic in this clip.

Bernie Luther was also coming into his own during the early part of the 1990s. As spoiled as we are with Instagram, Tumblr and blog culture it’s easy to forget the impact that ‘the magazines’ had on an artist’s career before the rise of social networking and instant uploads. The magazines- most notably Outlaw Biker’s TATTOO REVUE and Easyrider’s TATTOO were content machines, needing constant grist for the mill. An artist getting magazine coverage would expose them to a worldwide audience and provide bragging rights and validation with some tattoo fans becoming ‘collectors’ who sought out artists who regularly appeared in print. Obviously same can be said for Social Media, but back then it was a much smaller community.

But I digress. I’ll work on getting the audio synch issue fixed and to get the tape back to it’s generous owner as soon as I can.