The WKDS serves 134 students ranging from kindergarten through eighth grade. Reservation schools throughout the country are often geographically isolated, contend with a severe lack of funding, and have some of the highest dropout rates in the nation. But one of the most immediate issues facing the students at the WKDS is hunger. While every student qualifies for free meals during school, the need is greater at home.

Newly-appointed principal Alice Phelps has made arrangements with Feeding America in Rapid City for a monthly food distribution for reservation families. Unfortunately, the need at home is more than they can handle. With only a single convenience store on the reservation and the nearest grocery store a staggering 80 miles away, Phelps started a food pantry that she runs out of the school for families that are the most in need. That’s what The Warriors’ Fund is looking to stock. 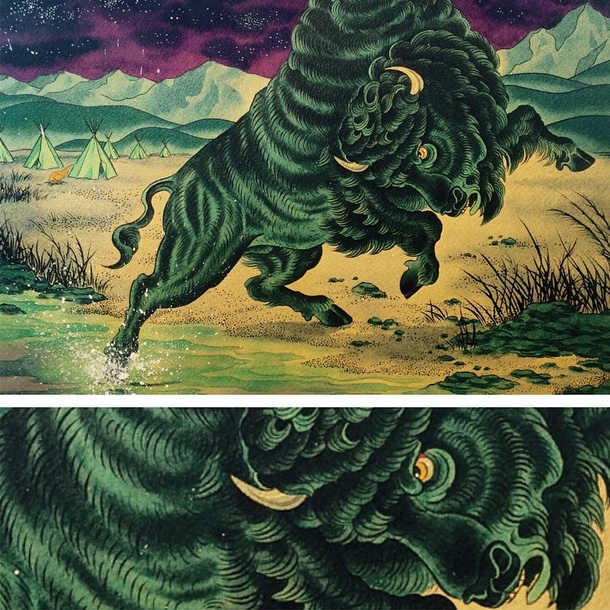 The Warriors’ Fund is being organized by Patrick Sullivan, a Brooklyn bar tender, along with tattooers Dave C. Wallin and Betty Rose, Eight of Swords’ owner and manager, respectively. Wallin, a Dallas native, has been tattooing for twenty-three years, with over half of them spent in New York. He opened Eight of Swords in 2011. Betty Rose is a ten year veteran of the business and began working at Eight of Swords in 2013. She has since helped organize previous events and is the creator of LadyTattooers.com, an online community spotlighting women in the tattoo industry.

It’s really great when an artist you respect finally gets his due. Thom DeVita has been one of the most unique American tattooers his entire career, redefining the art and including his personal aesthetic more distinctly than just about anyone that I can think of, a folk style of art that is at odds with what is considered ‘cutting edge’  or special effects tattooing.

Ed Hardy shined the spotlight on him in Tattoo Time V (which you can find as part of a reprint package here. It’s indispensable) which did a lot to expose his ‘outsider’ art to a new generation of young tattoo artists, but it was the release of the five part VICETV Tattoo Age (again: here. Watch it and come back, we’ll be waiting)  that will, when all of the cards are dealt, hopefully establish him as an artist who’s work transcends the medium. I’ve heard it said that DeVita always just called himself an artist, not a tattoo artist, and with the public finally embracing (and one might even say consuming) tattoo art as a legitimate medium I can only hope that Thom’s work will get the attention it truly deserves.

Chris Grosso, the producer of the Tattoo Age series, and Mike Rubendall of King’s Avenue Tattoo, set up a DeVita popup gallery a few weeks ago to help Thom’s art get out into the world. The walls of King’s Ave were covered with his distinctly DeVita work; mashups of acetate tattoo stencil rubbings, scrolls…  all as interesting as the fella who created them.  Dan Meyer and Bernardo Garcia snapped the following photos and I’m pleased as punch to be sharing them with y’all. Daniel Higgs, Civ, Nick Bubash are featured in the ones that are going up today, but check back soon- I’ve also got some really great shots of some of Thom’s most recent work.

Thanks to Chris and Mike for setting all this up, and of course to Thom, for everything else! 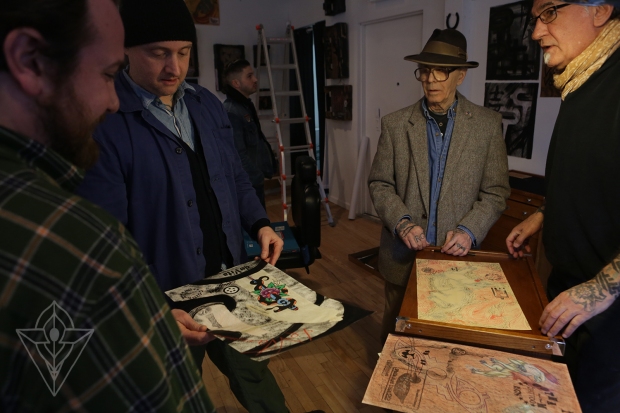 I’m someone who gives a lot of credence to meaningful coincidence; synchronicity has been a very strong influence in my life for the last decade, one that’s guided me in the right direction when I was lost, taken me in when I needed it and introduced me to some really amazing folks.

When I was getting tattooed Monday at Electric, I was introduced to a gentleman named Dan. Earlier this morning, I posted the Tattoo Age promo here on OV. A few minutes ago I received a press release for the Tattoo Age series, which features the very same Dan Santoro.

Nice and smooth, just how I like it. Follow the break to find the showtimes/information on Tattoo Age.