Current Church of Satan Magus Peter H. Gilmore is a pretty fascinating guy. I’ve been following his tumblr a while for his amazingly detailed cinema reviews (his two part review of the 2015 Godzilla remake would make a PhD thesis seem like it didn’t try hard enough) and thoughts on life and generally thought he couldn’t get much cooler.

Then I saw that he was curating a show for the folks at the HOWL TATTOO Gallery down in Florida. It’s one thing to mix Satan with cinema, but when he gets his scaly mitts on tattooing it seems like it could be the perfect combination. I can’t wait to see the book!

From Gilmore’s introduction:
“For The Devils Reign, our artists work in many styles to evoke the fantastic and demonic. Their renditions of the dread names from Anton LaVey’s The Satanic Bible serve as keys to unleash oft-hidden aspects of the human psyche. As he said himself, “There is a beast in man that should be exercised, not exorcised!.” Devilish art may mock authority, frighten the gullible, and embody complex emotions. Here you’ll find gateways for self-reflection, for opening one’s mind to unique perspectives.”

I’ve already seen the hashtag #nophotoshop popping up on my social networking feeds, with tattooers drawing a line in the sand between traditional drawing techniques and computer aided drawing. In the right hands it can be a valuable tool; Thomas Hooper used Photoshop to quickly lay out the mandala design he put on my fingers, Guy Aitchison and his ‘bio-mech collective’ participants make use of Wacom tablets and 3D modeling for laying out complicated drawings and light sources. In the wrong hands it can turn tattooing into graphic design and breed a generation of tattooists who know more about fonts and kerning than they do hand lettering.

That has absolutely nothing to do with this 3D model of a Mike Wilson painting by his old co-worker John Himmelstein. John has been interested in computer animation/drawing since the 1990s and is bridging the gap between 2D illustration and fully three dimensional models. As 3D printing becomes more affordable, ‘studies’ like this could help artists with more realistic drawings and light sources.

(Personal anecdote: John drew the original design for my Wilson backpiece. Mike was having a hard time conceptualizing what I wanted, so John did a quick sketch to help lay everything out. The two worked together in the early 1990s in Daytona Beach.) 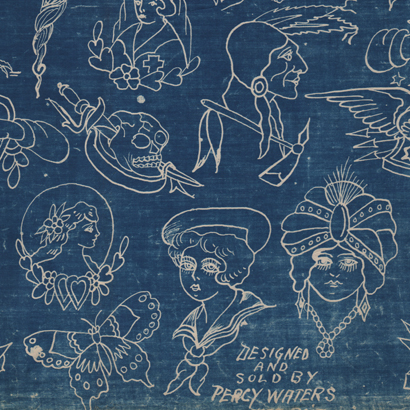 It’s always a good day when I get information on a new Yellow Beak Press project in the mail.

In 2015, Yellow Beak Press will be releasing their upcoming biography Sailor Vern. Leading up to the release of the Sailor Vern book, Yellow Beak Press will be selling limited prints of selected Percy Waters blueprint sheets from Sailor Vern’s personal collection. They will be 18×24 offset printed posters on 80lb gloss paper. Every one of these sheets carry with it classic imagery from one of the greats, presented in Waters’ unique printing method. We will be releasing each sheet individually over the course of the next few months and will reveal more detailed descriptions of each as they are listed. The first in the series will be released this week! Available now in the Yellow Beak Press store. Aaron LeGore will be selling them as well on ebay and through his shop, Calamity Jane Tattoo (970)424-5065.

Stay tuned for more details about the Sailor Vern book and follow us on instagram @yellowbeakpress or check our blog for more updates!

The photos I’ve seen from the book are amazing; when the pre-order comes out I’ll get the information up. 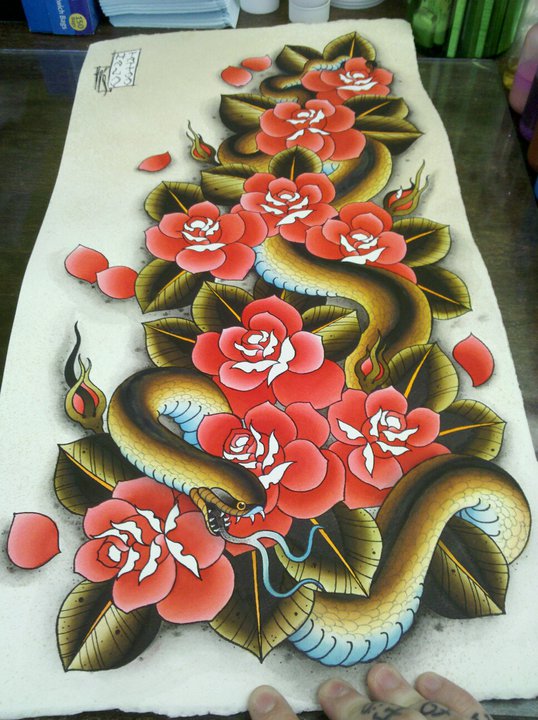 Sacred NYC will be hosting a fundraiser to support relief efforts to those affected by tsunami, earthquake and radiation exposure in Japan. The list of contributing artists is impressive and all artwork will be priced under $200; this could be your chance to score a modestly priced original or print far less than ‘going rate’ and the money goes to a great cause.

For more information including a list of contributing artists, check here.

The above piece is by Syracuse NY’s Rick Lohm, who was recently featured right here in OV.