ARMAGEDDON is a cloven brain captured in
hermaphroditic transubstantiation- Armageddon
is creations source and reason- Armageddon is a
union that supplants all that has been known, the
only destination, a war on superstition, a return to
the true tongue, violent storms of powerful
medicine, the lost home, a certain event mustered
in language- Enlist in metaphor or procrastination in
belief-  Dreams sabotaged by false instruction- A
mattress at the crossroads-  A theater of indecision-
The trough and crest of the Book of Antennae

It’s not really important if this story is true or not; if the details happened the way they were told to me or if they even happened at all.

A friend of mine was guesting at Tattoo City back in the halcyon days of Ed, Eddie, Freddy and Dan and in between tattoos a few guys came in for an appointment. He overheard them talking about a ‘crazy hobo in the park, yelling poems to the pigeons’ and making fun of his big bushy beard and his peculiar way of wearing layered oversized sports coats. When my buddy asked who they were there to see, they replied,  enthusiastically, DANIEL HIGGS!

Higgs has had many superlatives thrown his way over the course of his 30 year career as an artist: oracular, shamanistic, enigmatic and most importantly influential.

The ripples- the vibrations- of his influence extend well past his brief stint as a tattooer and even today, some fifteen years after the publication of his all text “The Book of Antennae” his resonance is still well justified.  While he’s probably much more celebrated for his graphic art, his poetry and songwriting add go hand in hand with his visual output. Book of Antennae, recently reissued by Chicago’s Now Testament, contains a self described ‘Alphabet Sequence As Composed By Daniel Nomo Higgs’ and while unlike The Doomsday Bonnet features no artwork other than the cover still deserves a place on any fan’s bookshelf. 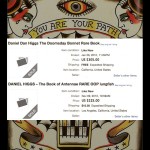 Over the decade and a half since it’s initial release, Antennae has become eBay gold, commanding prices easily 10x the original asking price. Now Testament is reissuing it in it’s original format (save for the cover; the original green ‘eye cross’ has been transmuted to red) for the incredibly humble $15.
Do yourself a favor and grab these while they’re still available: http://www.higgsnowtestament.com/